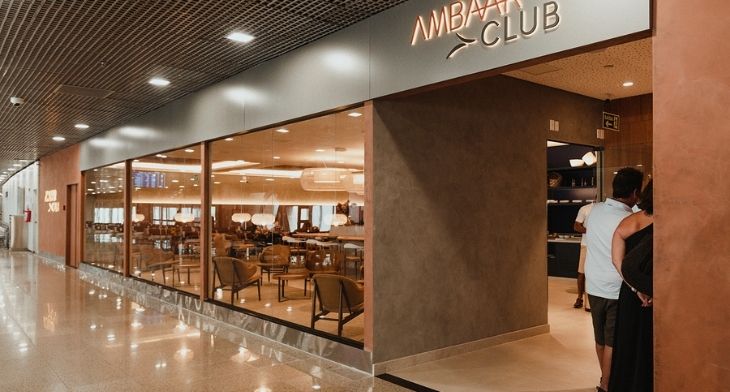 Following the successful opening of the first AMBAAR Club Lounge at Viracopos International Airport at the end of 2021, Airport Dimensions and VIP lounge operator AMBAAR Lounge have opened two further lounges in Brazil at Fortaleza Airport (FOR) and Porto Alegre Airport (POA).

The AMBAAR Club POA combines high-quality design with a host of facilities to make the travel experience more relaxing and convenient. Private rooms for calls and meetings will be complemented by an exclusive coffee bar area, buffet and cocktail bar. The lounge design has been inspired by local themes of the surrounding Rio Grande do Sul area, with an emphasis on wood and leather with highlights in rich shades of red, yellow and green that reflect the state’s flag. The result is a space that evokes the cosy environment of a country house typical of the mountain cities found in the state.

Meanwhile the new facility at FOR pays homage to the culture of Brazil’s north-eastern Ceará state. Carefully considered details such as a vibrant colour scheme provide a warm and welcoming ambience, while hammocks and strategic lighting recreate the city’s relaxing beaches and the balmy north-eastern Brazilian sun.

Both lounges will operate from 6am to 10pm, offering a range of seating options, children’s play areas and private booths, as well as an extensive selection of local and internationally inspired food and beverages.

Sabine Trenk, COO of Fraport Brasil, said: “The opening of these two new environments in Porto Alegre and Fortaleza raises the standard of services offered at our airports. The partnership with a qualified company and a reference in VIP rooms, such as AMBAAR Lounge, brings quality and professionalism to the experiences we offer to our passengers.”

As well as entering the South American travel market for the first time with AMBAAR Club, Airport Dimensions has been bolstering its position in the US and the UK with projects that have included the acquisition of the No1 Lounges business, with Airport Dimensions now operating nine No1 Lounge spaces at London Heathrow, London Gatwick and Birmingham airports. The company also recently expanded its award-winning The Club brand with a new opening at Cleveland Hopkins International Airport and is set to launch another at Charlotte Douglas International Airport early this year. In addition, Airport Dimensions announced last year a partnership with JPMorgan Chase, which will introduce Chase Sapphire Lounge by The Club, with locations already in development.