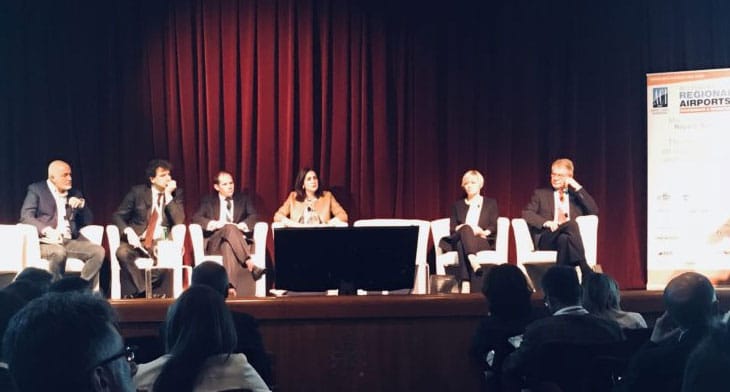 An insightful panel discussion during the first day of ACI Europe’s Regional Airports Conference and Exhibition addressed how the changes in airline strategies impact on regional airports.

The discussion covered the growing market presence of LCCs in the short haul market, as well as the rapid growth of the low-fare, long-haul market. It also highlighted how LCCs are evolving in terms of no longer just serving point to point traffic and offering a more diverse product for passengers, it’s no longer just one cabin service. Next generation aircraft are also changing the scene for airlines with the 737 Max8 illustrating how smaller aircraft can now fly longer ranges, therefore opening up potential routes that can be served from regional airports.

Ryanair’s CCO, David O’Brien, meanwhile argued that while it does serve primary airports, Ryanair is still focused on serving regional airports stating the airline is the “biggest domestic carrier in Italy.”

While he was adamant that “some airports choose to hide behind a regulation that doesn’t exist,” he was in agreement with other panellists that removing airport passenger tax from those airports serving less than 1 million passengers, will transform these smaller facilities.

Flying the flag for business aviation

Raising the issue of the role the business aviation community plays within the regional airport sector, Olga Krasowska, manager of airport operations at European Business Aviation Association (EBAA), said that business aviation makes up a large proportion of the traffic serving regional airports. “For business passengers, flying to a regional airport is generally more convenient and saves time, but it’s important not to lose sight of the economical benefit of this sector to the local economy,” she said.

But both Krasowska and Barriga agreed that the issue of regional carriers and business airlines struggling to find slots within airports needs to be addressed, with Krasowska saying that “some airports are ‘unofficially’ blocked from having slots for business aviation,” while Barriga stated a proposal to auction slots off to airlines “would be disastrous for regional airlines”.

Roger Estefors, the spokesperson on regional airports for the Assembly of European Regions (AER) declared that we need to put pressure on politicians to recognise the importance of regional airports. “Not everyone lives in a big city, but those based outside of the city, where there are plenty of industries requiring a skilled workforce, still need access to a good transport network, which includes a regional airport”.

Explaining how ten years ago, when Manchester Airport was deregulated, the airport changed its strategy so it could facilitate deals with airlines and focus on low-fare carriers he said: “We wanted to diversify our mix and not be reliant on the national carrier. Being deregulated meant we could engage with airlines in a more commercial fashion and focus on LCCs.”

Similarly, he added, when East Midlands lost BMI it had to diversify and focus more on freight operations. “Having the ability to adjust to the economic climate has been key to our growth.”.

He also credited the group’s ability to drive non-aeronautical revenue as instrumental to its growth.