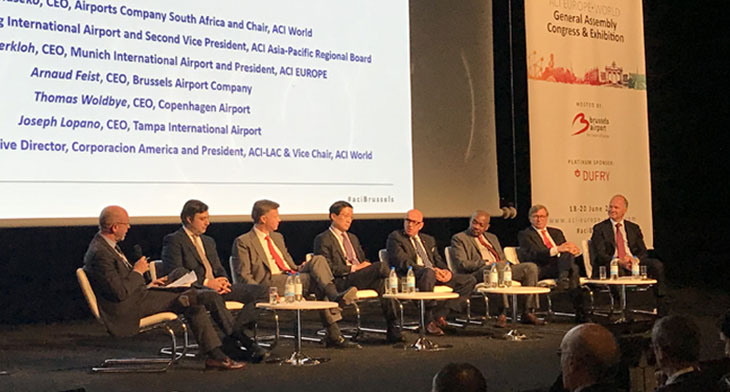 Hundreds of airport leaders and exhibitors have gathered in Brussels for the 28th Airports Council International (ACI) World General Assembly, Congress and Exhibition.

“Each airport is a destination in its own right and each one is different,” said Fred Lam, CEO, Hong Kong International Airport and second VP, ACI Asia-Pacific Regional Board. This sentiment of airports being destinations or communities in their own right was something that was echoed by all CEOs on the panel.

Dr. Michael Kerkloh, CEO, Munich Airport and chair, ACI Europe underlined that airports have different infrastructures depending on whether they are low-cost, regional or hub airports. “But the best way to build a brand is to focus on the local market” and to make the airport a reflection of that.

Involving the local community is key to an airport’s reputation and branding said Joseph Lopano, CEO, Tampa Airport. He revealed how his airport runs tours for local school children. “We need to get them involved and understanding the role that airports play in the local economy and that the airport sector offers an exciting job market.”

Describing airports as “great places to work”, Lopano raised the issue of how to attract and retain talented staff within airports. Explaining his theory as to why airports aren’t always  considered the most exciting places to work, Arnaud Feist, CEO, Brussels Airlines revealed how his airport was built by engineers. “They were concerned with operational excellence, but not necessarily what the passenger wants and how they experience the airport.”

He added “technical skills you can always find, but what we need now is staff with people skills – they need to be able to react to unknown and constantly changing events.”

Other speakers challenged this theory however, declaring airports exciting places to work. Thomas Woldbye, CEO, Copenhagen Airport, raised a smile from the audience, saying he believes “airports are just getting sexier.”

Airports of South Africa CEO, and chair of ACI World, Bongani Maseko, stated that for him being an airport leader and managing a team of staff “is similar to being the conductor of an orchestra. You want everyone to play the same tune, but you understand you are different things to different people. It’s a role he stipulated that requires you to be “innovative.”

Lopano wrapped up the discussion saying airport leaders face many challenges, but it’s their responsibility to build the right team and understand as an airport community “we’re all in this together.”